On 29 October 1969 two computers communicated with each other for the first time over the US science network Arpanet. This marked the birth of the Internet. In 1988, the domestic Top Level Domain .at was added to the Domain Name System, the WWW was invented in 1989 and Austria was connected to the worldwide Internet in 1990. There are now more than 1.3 million .at domains and more than four billion Internet users worldwide. Here is a chronology of events, on the occasion of half a century of the Internet.

It all started with a malfunction. The first Internet connection on 29 October 1969 did not work. Immediately after the input of "O" in the word LOG for "login", the computer ground to a halt and shut down. But a few hours later it worked! A refrigerator-sized computer at the University of California in Los Angeles communicated with a computer at Stanford University near San Francisco. This connection 50 years ago is considered the birth of the Internet. The small computer network, at that time still called Arpanet, was only intended to connect universities doing research for the Department of Defense. The focus was on scientific exchange. The gigantic commercial development of the Internet was not foreseeable at that time.

The first e-mail is sent

Two years later, it occurred to US computer scientist Ray Tomlinson that it would be useful to send messages between two computers connected via Arpanet. He used the @ sign for the e-mail, and sent it to a computer in the next room. Tomlinson was not aware of the implications of his 1971 invention. "I found it a cute idea." Years later, when e-mail became an indispensable part of correspondence the public became aware of Tomlinson, the inventor of e-mail. Unfortunately, he no longer remembered the content of the mail. Tomlinson was amused by the huge interest: "In the middle of the 90's a reporter asked me if I knew what I ate on the evening of the first e-mail. Who can remember what they had for dinner in 1971?"
Once e-mail appeared, it was soon followed by spam mail. The first spam e-mail was sent in 1978 and contained advertising content from the company "Digital Equipment Corporation". The word spam is originally a brand name for canned meat. Spam was available and omnipresent throughout Great Britain during the Second World War, despite rationing.

Not numbers, but names

The year 1981 marked a milestone: the IBM Personal Computer was launched. Devices were now designed not only for computer experts, technicians or scientists, but also for private use. With the conversion from Arpanet protocols to the "Internet Protocol", the name "Internet" also began to appear. Scientists led by Jon Postel of the USC Information Sciences Institute in California were also developing the architecture of the Domain Name System (DNS). In 1985, the world's first domain, nordu.net, was registered. The Internet now spread rapidly beyond the borders of the USA.

A message from the USA: "Done”

In Austria it was mainly universities that were concerned with this topic at the end of the 1980s. In 1988, Dr. Peter Rastl, then head of the Vienna University Computer Center, asked an employee to send an e-mail to US computer scientist Jon Postel. Postel was asked to include Austria in the list of country codes. Postel replied shortly afterwards: "Done”. The top-level domain .at was added to the DNS. Today Peter Rastl regrets not having kept this e-mail. "At that time we could not have realised that it would have had historical significance." A year later, the National Science Foundation of the USA decided to make the Internet usable for commercial purposes. On 10 August 1990, the University of Vienna and thus Austria was connected to the worldwide Internet.

The basis for today's Internet

However, the Internet owes its breakthrough to a man named Tim Berners-Lee. In 1989, the British scientist developed plans for the World Wide Web at the CERN nuclear research centre in Geneva. His project: he created an information management system to simplify the exchange of data between researchers. Berners-Lee thus created the basis for today's Internet. Put simply, the World Wide Web comprised a data transfer of electronic hypertext documents. All websites could be accessed via the same address format. The first browser and the CERN website were created.

From "hype" to mass media

For Microsoft founder Bill Gates, the WWW was initially "just a hype". However, he quickly revised his opinion during the following years, because its evolution was inexorable. More and more people were going online. By the year 2000, 160 000 addresses with the Top Level Domain .at had been registered, scarcely 20 years later it is 1.3 million.
The first registrations were administered by the University of Vienna. As interest increased rapidly, it became necessary to organize this activity within the framework of a company. In 1998 nic.at Internet Verwaltungs- und Betriebsgesellschaft m.b.H was founded - since 2012 it has been known as nic.at GmbH.

The Internet and the participating companies have grown rapidly since the 2000s. Numerous start-ups followed: Google launched its search engine back in 1998, the encyclopedia Wikipedia was founded in 2001, the social media platform Facebook followed in 2004 and YouTube one year later. When Apple introduced its first iPhone in 2007, user behaviour also changed. Now you can surf the internet from anywhere using your smartphone. Today, 50 years after its inception, more than four billion people around the world use the Internet. It is a mass medium that has become indispensable.
What will the Internet look like on its 100th birthday? 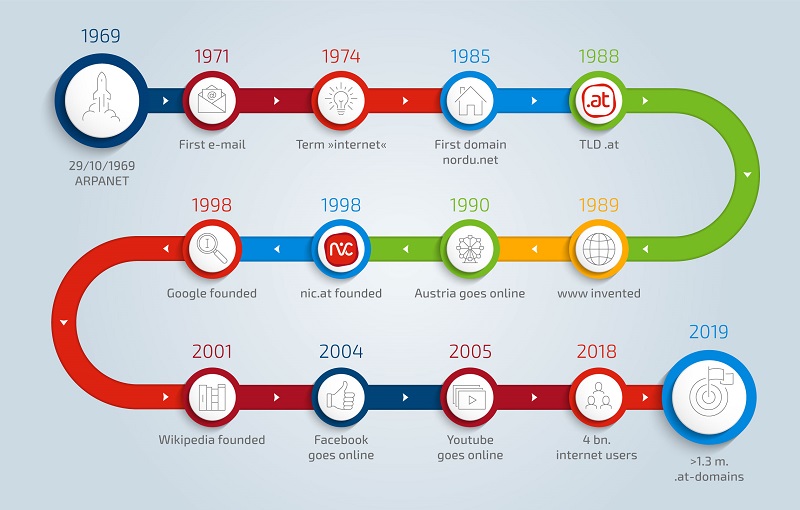